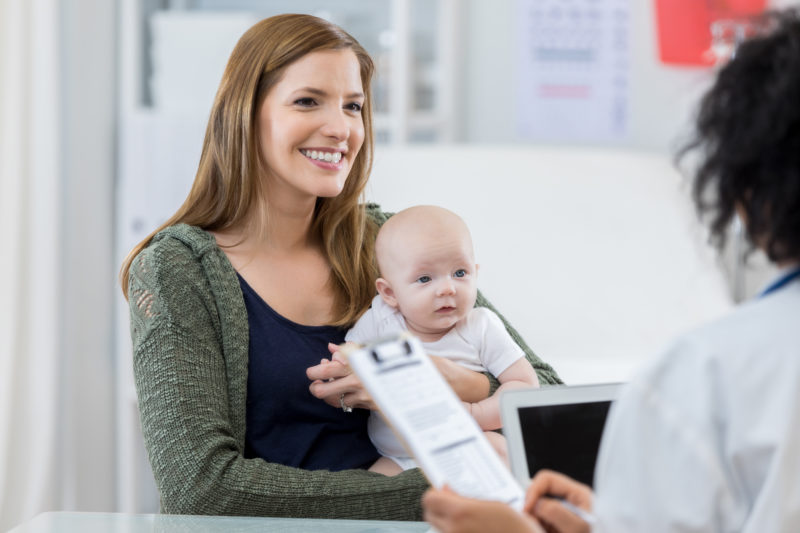 I’ll admit, when it came time to feed my baby (now 5 years old!) solid foods, I was a little nervous about the allergens. In spite of what I knew about the research and the fact that there was none to support avoiding common allergens in infancy, I was still a little nervous. And this, even though neither my husband nor I had any food allergies. While the potential for food allergies is a true concern and will occur in some children, it’s actually far less common than some people think. In order to overcome my fear, I had to look at the facts. For new moms and dads now, the same thing is true. Fortunately, since my son was weaned, new research has been done and shows that “early and often” is the rule when it comes to feeding infants peanut foods. Here are some common concerns about early introduction of peanut foods to infants and how you can overcome them to reduce the risk of a peanut allergy:

Actually, researchers have learned that earlier introduction is probably best for preventing peanut allergies. In the LEAP study, a study of high-risk infants, the older the child was when they began introducing peanut foods, the more likely they were to develop a true peanut allergy. Oral immunotherapy for peanut allergy has also shown more effective in younger children, as compared to older children and adults, suggesting that the immune system is actually more malleable at a younger age.

Concern 2: I’m afraid my baby will have a severe or life-threatening reaction!

A recent study showed that infants are less likely to suffer severe reactions (such as anaphylaxis) as compared to older children (1). For more information on this study, check out this article. While severe reactions can happen in infants, these reactions are much more likely to happen if introduction is delayed and reactions happen when a child is older. With all of that in mind, if a child is at high-risk for developing a peanut allergy, they should first be evaluated by a pediatrician. She may want to observe the first introduction of peanut foods in her office.

Concern 3: Since we don’t have any risk factors in our family, there’s no harm waiting to introduce peanuts and other potential allergens.

The LEAP study identified having severe eczema and/or egg allergy as risk factors for developing peanut allergies. However, a significant percentage of food allergic children do not have any known risk factors. There is convincing evidence to support early introduction to prevent peanut allergy in all children, which is why the NIAID Guidelines recommend early introduction for all infants starting as early as 4-6 months of age.

Concern 4: My baby’s sibling has a peanut allergy, so our whole family needs to avoid peanuts.

Although having a relative with food allergies was not considered a risk factor in the LEAP study, there is increased risk for siblings of food allergic children. Early introduction of peanut foods may help protect all children, which is why the NIAID Guidelines recommend it for all groups of children. Steps should be taken to protect the peanut allergic child, but research shows that just being near someone eating or even touching peanut foods will not cause a severe reaction—read more about that here.

Concern 5: The LEAP study was just one study; I’m waiting for more research before I trust the new recommendations.

It’s understandable for parents to be apprehensive about these recommendations when they appear to be the complete opposite of what experts previously recommended. But it’s important to keep two things in mind:

First, the LEAP study was groundbreaking research with hundreds of carefully followed children over five years. It was extremely rigorous. However, it was built on other studies that also support the benefit of early introduction to reduce the risk of developing peanut allergies. For instance, a 2008 study compared two genetically similar groups of children – one in Israel and one in the U.K. – suggesting that peanut allergy may be ten times less likely in the Israeli children who ate peanut foods in infancy.

Second, the recommendations to feed babies peanut foods is universally endorsed by allergy and pediatrics organizations in the U.S. and internationally. In fact, following the release of the LEAP study results, major pediatric and allergy organizations around the world come together to release a consensus communication in support of early introduction to reduce the risk of peanut allergy.

Learn more about the latest guidelines, how to introduce peanut foods safely and preventing peanut allergies at www.preventpeanutallergies.org.