Educators and parents alike are asking, “what is the best solution for accommodating children with food allergies in schools?” Parents of peanut allergic children are concerned about protecting them from a potentially fatal reaction. Many other parents count on peanut butter as an affordable, shelf-stable nutritious option they know their children will eat.

Is your school developing a food allergy management program? Spokane Public Schools’ Doug Wordell discusses practices that have worked in his system.

Making peanut butter and jelly sandwiches, while preventing cross-contact of food allergens, is made simple with these step-by-step instructions from registered dietitians and foodservice professionals.

K-12 school nutrition pros can take peanut butter beyond the classic PB&J, and add a tasty element to a variety of dishes with this simple recipe for all-purpose peanut sauce.

Jessica Gerdes, MS, RN, NCSN, who works at the Division of Specialized Instruction, Nutrition and Wellness at the Illinois State Board of Education, discusses school allergy policies and best practices.

Consensus among many experts and organizations – including the Centers for Disease Control and Prevention – is that schools should develop and implement a comprehensive allergy management program. Everyone has a role to play; those plans should include school leaders, teachers, cafeteria staff, health professionals, parents and students. This is especially important because research indicates that 25 percent of food allergy reactions may occur in the school environment, including first-time reactions.*

More than 99 percent of Americans can enjoy peanuts without any issue, but according to the National Institute of Allergy and Infectious Diseases (NIAID) Expert Panel, peanut allergies affect 0.6 percent of us – and fall behind milk and eggs in children and behind shellfish among adults in prevalence.

Are food bans the right approach?

Food bans take the focus off of education and onto enforcement, when all resources are needed to provide education. Being “allergen free” gives a false sense of security. Allergic children and school officials can become lax about the precautions needed, potentially increasing the risk for allergic reactions.

This article interviews three physicians – the immediate past president of American College of Allergy, Asthma & Immunology, a professor of pediatrics and a researcher at the Jaffe Food Allergy Institute at Mount Sinai in New York and the director of the Food Allergy Center at Massachusetts General Hospital – about their stance on school bans. See why they agree that school bans offer up a false sense of security.

A 2014 survey by the University of Michigan of 816 parents of children 5-12 years old, of which 5% reported having a child with peanut or tree nut allergy, showed that most parents are not in favor of banning peanuts in schools – including parents of allergic children. In fact, a Canadian study of 1825 allergic children showed that reactions were nearly twice as likely in schools and day-care facilities that banned peanuts (7.5%), as compared to those that did not (3.7%).  Most recently, a study published in the Journal of Allergy and Clinical Immunology showed that there was no difference in the rates of epinephrine administration between schools that banned peanuts and those that did not. 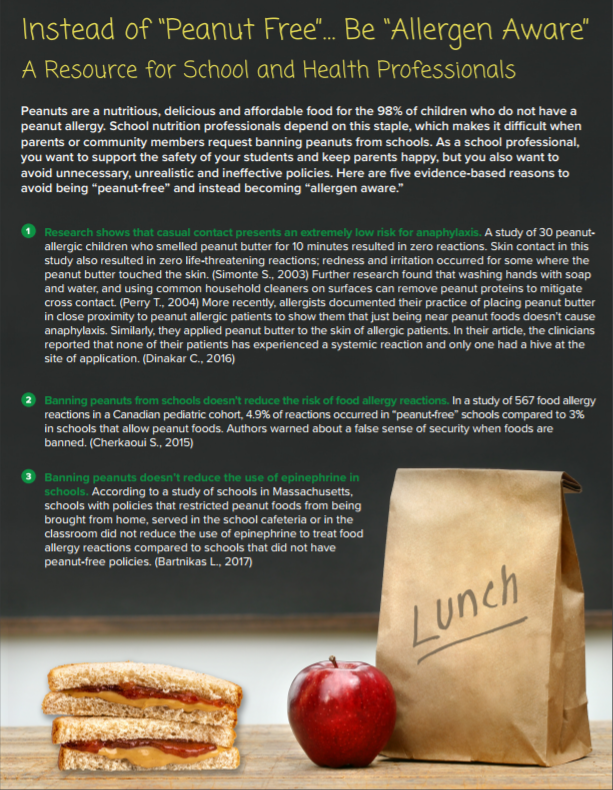 So what’s the right approach?

A combination of caution and preparation, along with a comprehensive food allergy management plan – including education of students and parents and training for all staff – helps reduce the risk of accidental ingestion and ensure that staff are ready in case a reaction occurs. Non-student specific (stock) epinephrine may also be valuable in helping to protect those with all kinds of anaphylactic reactions

Can a peanut allergic child be in the same room where peanuts or peanut butter are being consumed?

Research supports that people with peanut allergies are highly unlikely to have serious reactions as the result of casual contact and that simple soap and water cleans surfaces and hands of peanut proteins. The researchers in this study were also unable to detect the airborne allergen.*

Another research study looked at how people with peanut allergies would react to peanuts and peanut butter in their environment. Thirty peanut-allergic children who had previously reported having severe reactions to smelling or touching peanut butter were exposed to the smell peanut butter for 10 minutes and there were zero reactions. In the same study, peanut butter was placed on the child’s skin and there were no life-threatening reactions; some experienced redness or irritation where the peanut butter touched the skin.

Ingestion has the potential to cause reactions, some of which could be severe. It is important for people with peanut allergies to use caution to prevent accidental ingestion. Since reactions are unpredictable, every allergic individual should maintain a food allergy action plan to help keep them safe.**

What resources are available to schools to help manage food allergies effectively?

*The National Peanut Board is not responsible for information presented on outside websites.

Are schools required to stock epinephrine?

The new School Access to Emergency Epinephrine Law incentivizes schools to have epinephrine injectors available in the school in case of a severe allergy attack. Some states are moving in this direction. For more information on managing food allergies in your child’s school, contact the school district to find out more about the status in your state.

Everyone on the education/care team should be trained to administer epinephrine, the only medication approved for treating anaphylaxis, a potentially life-threatening allergic reaction, in an emergency situation.