In 2017, the National Institute of Allergy and Infectious Disease- sponsored expert panel released recommendations about the early introduction of peanut foods as a means to prevent peanut allergy. You will find additional details about this below and points to consider as you plan to introduce peanut protein to your infant. Currently, it’s estimated that approximately 20 percent of peanut-allergic children will outgrow their allergy.

One of the most significant advances in food allergy occurred with the release of the results from The Learning Early about Peanut Allergy (LEAP) study in early 2015.  Led by Dr. Gideon Lack of Kings College in London, LEAP showed a reduction in the development of peanut allergies of up to 86 percent by children who were exposed to peanut protein early.* Dr. Shahzad Mustafa, allergist and medical advisory board chair for FAACT, discusses the early introduction guidelines in this video.


The results led experts at the National Institute of Allergy and Infectious Disease (NIAID) to rethink how we approach food allergy prevention. NIAID’s new guidelines now recommend introducing peanut protein to infants as early as 4-6 months of age, depending on risk factors – including family history and signs of eczema.

Here are points to consider as you plan to introduce peanut protein to your infant:

In the podcasts below, Sherry Coleman Collins, MS, RDN, discusses the latest research on peanut allergies, including instructions on how and when to introduce peanut foods to infants.

These videos can help 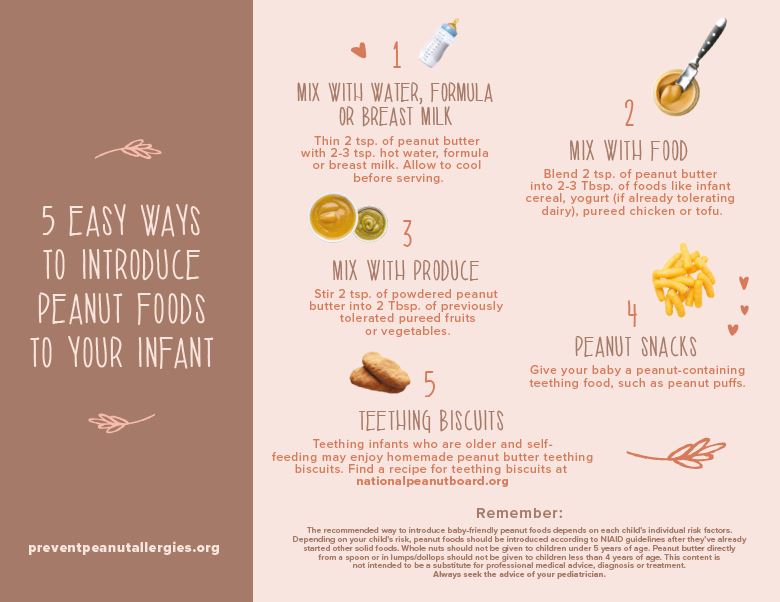